Beatlemania is a term that originated during the 1960s to describe the intense fan frenzy directed toward The Beatles during the early years of their success. The word is a portmanteau of "Beatles" and "mania", similar to the much earlier term Lisztomania used to describe fan reaction to the concerts of pianist Franz Liszt.

Andi Lothian, a former Scottish music promoter, claims that he coined the term while speaking to a reporter at the Caird Hall Beatles concert that took place as part of the Beatles Mini-Tour of Scotland, on 7 October 1963,[1][2] and an early printed use of the word is in The Daily Mirror 15 October 1963 [3] in a news story about the previous day's Beatles concert inCheltenham.

Beatlemania became common in the United States after the Beatles performed on The Ed Sullivan Show in 1964. It was characterised by intense levels of hysteria demonstrated by fans both at the actual concerts and during the band's travels to and from hotels, concert venues, and the like.

Beatlemania in the aftermath of John Lennon's assassination in 1980Edit

Lennon's assassination triggered an outpouring of grief around the world on an unprecedented scale.[29] Sales of his music—both with the Beatles and as a solo artist—soared in the months following the tragedy. Lennon's remains were cremated at Ferncliff Cemetery in Westchester. No funeral was held.[30][31] Yoko Ono sent word to the chanting crowd outside the Dakota that their singing had kept her awake; she asked that they re-convene in Central Park the following Sunday for ten minutes of silent prayer.[32] On 14 December 1980, millions of people around the world responded to Ono's request to pause for ten minutes of silence to remember Lennon.[33] Thirty thousand gathered in Liverpool, and the largest group—over 225,000—converged on New York's Central Park, close to the scene of the shooting.[33] At least two Beatle fans committed suicide after the murder, leading Yoko Ono to make a public appeal asking mourners not to give in to despair.[34] Ono released a solo album, Season of Glass, in 1981. The cover of the album is a photograph of Lennon's blood-spattered glasses. A 1997 re-release of the album included "Walking on Thin Ice", the song the Lennons had mixed at the Record Plant less than an hour before he was murdered.

Chapman pleaded guilty to Lennon's murder in June 1981,[35] against the advice of his lawyers,[36] who wanted to file an insanity plea.[37][38] He received a life sentence but under the terms of his guilty plea became eligible for parole in 2000, after serving 20 years. Chapman has been denied parole at hearings every two years since 2000 and remains an inmate atAttica State Prison.[39][40]

Annie Leibovitz's photo of a naked John embracing Yoko, taken the day of the murder, was the cover of Rolling Stone's 22 January 1981 issue, most of which was dedicated to articles, letters and photographs commemorating John's life and death.[41] In 2005 the American Society of Magazine Editors ranked it as the top magazine cover of the last 40 years.[42]

Because of the Nixon administration's FBI/CIA surveillance to spy and efforts to deport Lennon in the 1970s,[43] there are those who believe the murder might have had political motivation.[44][45]

Many Beatlemania-infected people trying to pass the gaurds in 1964. 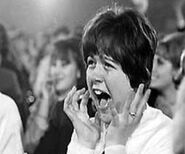 This man is not gay he just has beatlemania!
Add a photo to this gallery

The term later became the name of various tribute groups dedicated to singing the songs of the Beatles, many with impersonators of the group.[4][5]

The term has had a number of derivatives, usually short-lived, to describe a similar phenomenon toward other bands - such as "Rollermania"[6] in the early 1970s for the Scottish band Bay City Rollers, "Menudomania" in the 1980s to describe frenzy across Latin America for the boy band, Menudo, and "Spicemania" in the 1990s.[7][8] for the Spice Girls. Also, Howard Finkel used the name to create the WWE pay-per-view, WrestleMania and Hulk Hogans Hulkamania.

Retrieved from "https://songpedia.fandom.com/wiki/Beatlemania?oldid=12628"
Community content is available under CC-BY-SA unless otherwise noted.